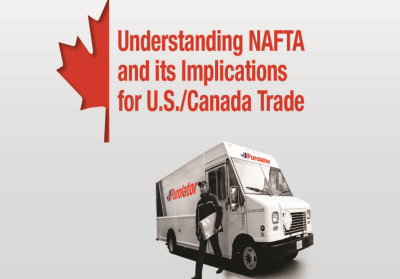 In the 20 years since the North American Free Trade Agreement (NAFTA) took effect, trade between the United States and Canada has increased by 300 percent, and the countries are each other’s top trading partners.  A key provision of the trade agreement is the elimination of duties on all eligible products traveling between the U.S., Canada, and Mexico.  Eligible products are generally those that “originate” in one of the three countries, and NAFTA lays out detailed “rules” as to what exactly constitutes origination.  Determining a product’s NAFTA eligibility, and knowing how to apply for those benefits can be time-consuming and complicated.

The agreement created the world’s largest free trade zone, affecting 450 million people and impacting three countries that together produce more than $17 trillion annually in goods and services. Trade among the three countries has more than tripled, but many ask at what cost. For example, here in the U.S. some claim jobs were lost to Mexico and that U.S. workers’ wages suffered.

While the debate continues, many U.S. businesses are finding NAFTA benefits to be a game changer. NAFTA has leveled the playing field in many important areas, chiefly by eliminating tariffs on domestically produced items moving between the partner nations and by allowing U.S. businesses nearly unfettered access to the Canadian and Mexican markets. But wading through the trade agreement’s legalese and technical requirements can be a daunting exercise. As a result, many businesses may be unaware of its key provisions and may not be receiving financial benefits to which they are entitled.

The United States and Canada are each other’s largest trade partners, with more than $1.68 billion in goods crossing the border each day. NAFTA has become an integral part of the trade process, and the information provided will familiarize business managers, logistics managers, finance professionals—and anyone else with an interest in supply chain efficiency—with some of the trade agreement’s key provisions, compliance processes, and business implications.

Purolator Inc. has released a new white paper that details the NAFTA eligibility process along with other key aspects of the trade agreement.  As the paper makes clear, it is essential for a U.S. business that ships to Canada to understand NAFTA’s potential implications for duty savings and other benefits.