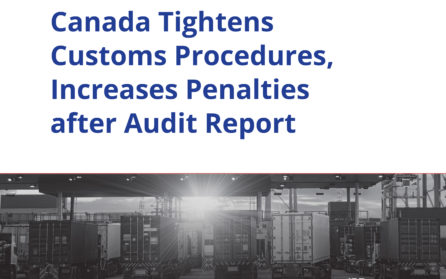 U.S. businesses that ship to Canada will have an unwelcome surprise awaiting them should they run afoul of Canadian customs mandates. In March 2019, the Canadian Border Services Agency (CBSA) announced plans to increase penalties for commercial importers after an internal audit found the agency’s existing penalty structure was not sufficient to deter noncompliance.

The audit, conducted by the Office of the Auditor General of Canada (OAG), reviewed CBSA practices with regard to management and collection of customs duties. In an accompanying report released in March 2017, CBSA was cited for its inability to “accurately assess all customs duties owed to the government on goods coming into Canada.” Further, the report noted, “this was due in part to the agency’s selfassessment system, which may have allowed importers to be noncompliant with import rules and regulations, and in part to the agency’s own internal challenges relating to staffing.”