Does Your Apparel Supply Chain Need a Logistics Makeover? 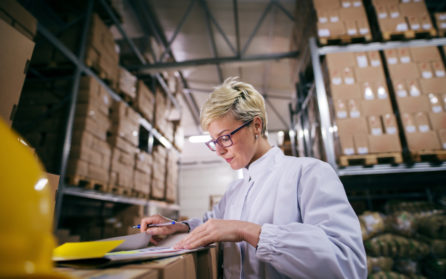 When then J.Crew Chief Executive Officer Mickey Drexler was asked to describe his apparel company’s typical customer, he responded with: “She’s loyal as hell until we go wrong. Then she wants it on sale.”

Drexler’s simple, albeit blunt, observation would seem to describe consumer attitudes across the entire apparel and accessories market. Today’s consumers have heightened expectations about virtually every aspect of their apparel-buying experiences:

These changing expectations are driven largely by the increasing role of eCommerce and, specifically, the tremendous impact amazon.com is having on the apparel industry. Financial services firm Cowen and Company expects Amazon to overtake Macy’s as the largest U.S. apparel retailer by the end of the 2018, with consumers increasingly turning to Amazon as a “go-to” source for basics including T-shirts, jeans and underwear. In fact, Amazon’s top-selling apparel items during 2017 included ASICS men’s running shoes, Levi’s men’s regular fit jeans, and UGG women’s boots.

Customers have grown accustomed to the ease and convenience of online shopping, and they expect apparel retailers to do whatever it takes to meet those expectations.

Easier said than done. These changing expectations come at a time when apparel companies’ supply chains are more globally sourced than ever, with 60 percent of companies sourcing materials from more than 10 countries or regions. For most apparel makers, this includes suppliers located in China as well as Vietnam. Sprawling supply chains have helped create long lead times – currently it takes as long as 15 months to bring a new concept to market.

An added concern includes threats of increased trade restrictions between the United States, China, and other nations. Both China and the United States have proposed new tariffs on goods traveling between the two countries, which could significantly drive up the cost of fabrics and other apparel-related materials. The threat of trade barriers has become so significant that the U.S. Fashion Industry Association’s 2017 industry benchmark study saw “protectionist trade policy agenda in the United States” jump from the 10th “top business concern” during 2016 to the number one concern in 2017.

Meeting these challenges can be done of course. Look at Zaro. The Spain-based fast-fashion innovator has seemingly mastered the art of rapid production and distribution to become the world’s largest fashion retailer, with sales of $17.2 billion during 2017. Zaro turns out an estimated 10,000 different products each year, which keeps customers returning to its stores. According to Forbes, “it takes the company only 10 to 15 days to go from the design stage to the sales floor.” Roughly 60 percent of all products are made in Spain and nearby countries. Merchandise is shipped from distribution centers located in Spain, and stores receive new shipments twice a week.

While most retailers aren’t looking to mimic Zaro’s “fast-fashion” strategy, many analysts believe the “sweet spot” lies somewhere in between. The key is striking the right balance between current processes that work, those that don’t, and innovative new options. A retailer that commits to finding that balance will benefit from greater efficiencies including shortened distribution cycles and better customer service.

The following discussion provides an overview of top trends and challenges affecting today’s apparel industry along with discussion about how savvy logistics solutions are helping to solve those problems. At a time when “item out of stock” have become the four most dreaded words in a retailer’s lexicon, smart logistics have taken on a new urgency, with apparel managers realizing the value of a customized, innovative logistics strategy.

A Global Supply Chain That Is Becoming More Global

Clearly, the industry has changed dramatically. But something that has not changed is the critical need for apparel makers to have the latest fashion trends delivered to stores as quickly as possible – no easy task given that products arriving at the local mall are usually coming from China, Vietnam, or India.

Also important to keep in mind are the apparel markets of North American Free Trade Agreement (USMCA) partners Canada and Mexico. During 2017, those markets were valued at $26 billion and $14 billion, respectively.

The U.S. Fashion Industry Association’s 2017 benchmarking survey found China to be the most frequently used sourcing base, with 91 percent of respondents indicating that they source in China. Important to note, that figure is down from 100 percent, which the survey reported in each of the three previous years.

Top sourcing bases, as cited by survey respondents, include:

U.S. apparel companies benefit financially from sourcing production in low-cost developing countries, but this strategy is not without its drawbacks. Key considerations include:

The emergence of “fast fashion” and eCommerce has exposed the inefficiency of this model, with Zara able to bring a product to market in just three weeks. Zara’s drastically shortened lead time is possible because of multiple factors, including:

While traditional apparel companies can certainly take note of the Zara model, few are in a position to uproot their globally based supply chains and start over. Instead, companies are looking to reduce lead times by integrating any number of innovative approaches and using technology to help weed out inefficiencies.

A 2017 survey conducted by Gartner found PLM solutions are having a significant impact among apparel companies:

Li & Fung was able to overhaul that process by introducing three-dimensional digital designs instead of physical samples. Now designers in the United States can “see” modifications throughout the product development process and collaborate through an integrated system with the Asian production team. This has trimmed a process that routinely took six months down to a few days.

Few industries experience the repercussions of customs bottlenecks more than apparel companies. For one thing, since 97 percent of apparel sold in the U.S. is made elsewhere, virtually every article of clothing must comply with all applicable customs mandates and regulations, and undergo a strenuous customs examination. In addition, since the bulk of products are made in developing countries, there is a strong likelihood that a customs experience will be less than efficient.

Consider a men’s three-piece suit that is assembled in China but depends on fabric from Vietnam and zippers and buttons made in India. Each component – the fabric, zippers, and buttons – will need to comply with Vietnamese and Indian export protocols as well as with Chinese import requirements. Once completed, all documentation must be compiled in accordance with strict U.S. import requirements.

The World Bank maintains an annual “Logistics Performance Index,” which benchmarks countries’ overall customs management performance in key areas including customs efficiency. During 2016, among countries with the highest concentrations of apparel suppliers, scores for customs efficiency included: China (3.66/5.0), Vietnam (2.98/5.0), and Bangladesh (2.66/5.0). The United States was rated (3.99/5.0) and USMCA partners Canada and Mexico scored (3.93/5.0), and (3.11/5.0) respectively.

International customs complexities are further exacerbated by the fact that customs requirements can be very fluid. A company believing it has finally become an expert in a certain country’s customs requirements may find those regulations have changed dramatically – sometimes with no warning.

To manage this uncertainty – and minimize the risk of shipment delay – apparel companies are increasingly turning to experienced logistics providers for “on the ground” customs expertise. A capable provider will offer access to a network of local providers who will have complete awareness and expertise with domestic customs requirements, who will ensure that a time-sensitive shipment has all necessary paperwork completed and filed, and who will make sure all necessary duties and fees paid prior to the shipment’s arrival at the border.

In addition, a local customs expert will understand the nuances of that country’s customs process. This could include knowing which clearance points tend to have delays, which are generally most efficient, and an understanding of any trade facilitation programs that could expedite the process.

While the U.S. and China continue to debate possible apparel tariff increases, American companies have the opportunity to take advantage of several existing opportunities to minimize tariff obligations.

First, and something applicable to all imports, not just those from China, is the importance of a correct tariff classification code. Every product entering the United States must be assigned a 10-digit code from the Harmonized Tariff Schedule of the U.S., maintained by the U.S. International Trade Commission. The classification code is used to determine a product’s rate of duty and eligibility for free trade agreement benefits.

With tens of thousands of codes to choose from, and sometimes just slight differences between codes, it is not uncommon for an incorrect code to be assigned. The Auditor General of Canada, for example, reported that 20 percent of shipments arriving in that country are misclassified. Improper tariff classifications can result in tariff overpayments and in a failure to obtain applicable free trade benefits. Although most apparel products originate in countries with which the U.S. does not have a free trade agreement in place – the International Trade Association’s Office of Textiles and Apparel (OTEXA) reports 85.7 percent of textiles and apparel imports came from non- FTA regions during 2016 – FTAs can be a source of tremendous savings.

But of those imports that do come from countries with which a free trade agreement is in place, a significant number are missing out on FTA benefits for which they are eligible. As reported by the University of Delaware’s Professor Sheng Lu, “in 2016 about 29.9% of U.S. textile and apparel imports from South Korea, 24.3% from CAFTA-DR [Dominican Republic-Central American Free Trade Agreement], 16.3% from USMCA, and 12.9% from Columbia did not enjoy the duty-free treatment granted by the respective FTAs.”

Professor Lu noted that companies may not be applying for these FTA benefits because of the complex process for proving eligibility. Each trade agreement includes detailed “rules of origin” that a business must meet in order to be eligible for benefits, and those rules are very precise.

Many companies entrust the FTA-application process – as well as the entire customs compliance process – to a customs broker or logistics provider. A knowledgeable third party will have experience with tariff classification, FTA benefits eligibility, and all other aspects of the complicated global customs process.

As consumers are looking for more faster deliveries and more accessible channels for online shopping, it’s important for retailers to adapt to those needs in an effort to remain competitive.

At Purolator International, we are proud to offer logistical innovations and modern technology that help our partners succeed in the retail space.

When you partner with us, you can count on expedited services, returns management solutions, dependable customer service and more. Contact us today to learn more about our apparel shipping solutions.